Complex diseases are common health problems caused by genetic and other internal and external factors. Probabilities and results on this report are based only on your genetic profile. 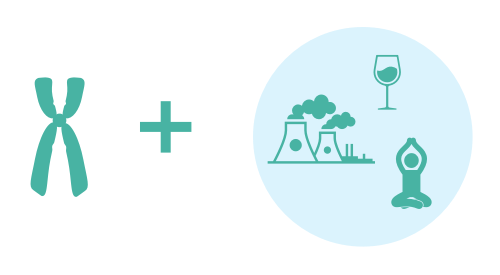 What are complex diseases?

Multifactorial conditions have in common that they do not always develop despite the suggested presence of an affected gene(s). The inherited affected gene(s) make the person at increased risk for developing the condition (predisposed or susceptible) but unless other factors are present, the condition may never develop at all.

Genomapp’s database includes more than 7000 conditions. Use our search feature to check if the disease you are interested in is in the list.

Alzheimer disease is a degenerative disease of the brain that causes dementia, which is a gradual loss of memory, judgment, and ability to function. This disorder usually appears in people older than age 65, but less common forms of the disease appear earlier in adulthood. Definition on GHR.

Parkinson disease is a progressive disorder of the nervous system. The disorder affects several regions of the brain, especially an area called the substantia nigra that controls balance and movement.

Often the first symptom of Parkinson disease is trembling or shaking (tremor) of a limb, especially when the body is at rest. Typically, the tremor begins on one side of the body, usually in one hand. Tremors can also affect the arms, legs, feet, and face… Definition on GHR.

Please note that Genomapp is not for diagnostic use, it does not provide medical advice and is not a substitute for it. Consult with your health specialist if you have any question.

This website uses cookies to improve your experience while you navigate through the website. Out of these, the cookies that are categorized as necessary are stored on your browser as they are essential for the working of basic functionalities of the website. We also use third-party cookies that help us analyze and understand how you use this website. These cookies will be stored in your browser only with your consent. You also have the option to opt-out of these cookies. But opting out of some of these cookies may affect your browsing experience.
Necessary Always Enabled
Necessary cookies are absolutely essential for the website to function properly. This category only includes cookies that ensures basic functionalities and security features of the website. These cookies do not store any personal information.
Non-necessary
Any cookies that may not be particularly necessary for the website to function and is used specifically to collect user personal data via analytics, ads, other embedded contents are termed as non-necessary cookies. It is mandatory to procure user consent prior to running these cookies on your website.
SAVE & ACCEPT